Discover the unique destination of entertainment that is Bankstown Sports!

There's plenty of things to see, do and entertain our little ones at Bankstown Sports!

Your questions are answered in our comprehensive FAQ'S section.

We are dedicated to our local community. Supporting our local sports clubs and rewarding good works in the community with our ClubGrants programs. 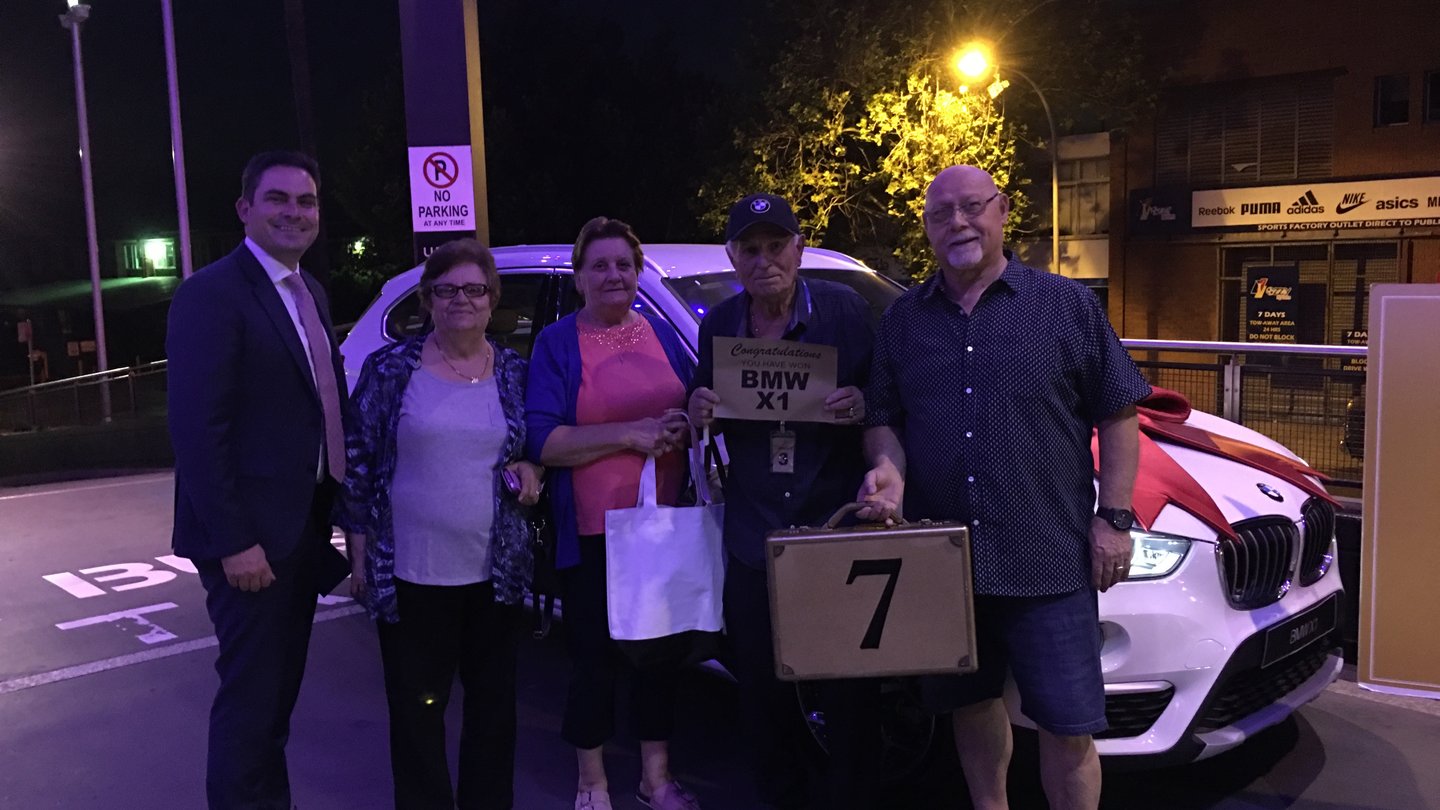 Bankstown Sports was flowing with anticipation on Thursday 14 November as members arrived early, eagerly hoping to be the lucky new owner of a BMW X1 or win a share of $16,000.

Prior to the final draw night, we had secured 8 finalist positions over 8 weeks, and had a remaining four finalists spots to give away. Members began arriving from 4pm to swipe their membership cards for one last chance to share in the prizes on offer.

Our 8 finalists arrived early to ensure they registered their presence to stake their claim! This meant that the 4 remaining finalist spots would be drawn at 6.30PM, 7PM, 7:30PM and 8PM.

At 6.30PM the barrel containing 3 hours worth of tickets was spun and Finalist 9 was selected. M.Varnavelias’s ticket was drawn out, and she quickly paced through the Rainforest Lounge in under 4 minutes to claim her place in the final briefcase selection. M.Varnavelias has been a member since 2010 and was delighted to take up the spot on the main stage.

The Rainforest Lounge was still a buzz, with everyone wishing and waiting to see if they would be taking up a place in the final draw. In the meantime, tickets kept dropping and the barrel kept spinning.

Finalist 10 was called at 7PM. We were looking for W.Makhoul. Almost instantly an ecstatic member emerged from the crowd in the Rainforest Lounge, claiming the finalist position.

Lucky final finalist 11 was C.Bui. He appeared with a large smile on his face as he made his way to the stage.

Finally, A.Carayannopoulos’ lucky ticket has been drawn out of the barrel, he was so thrilled to have made the final cut at 8PM.

Then with all 12 finalists drawn, it was time to select their choice of briefcase numbers.

I.Bosilkovska was the first finalist to select her briefcase, as she was the finalist winner from week 1 of the ‘Mystery Briefcase’ promotion. She selected briefcase number 4 and couldn’t wait to find out what was in the briefcase!

Y.Safreh, finalist from week 2 was quick to select briefcase 9. On went the remaining selections until all 12 briefcases were allocated. Finalists then took position on the main stage in the Rainforest Lounge, behind their selected briefcase. They were then opened individually, in numerical order.

1, 2, 3, 4, 5, 6… cash kept coming out… until briefcase 7 was unclipped by T.Mihajlovski, who was thrilled to reveal he was the proud owner of a brand new BMW X1! The remaining finalists were exhilarated to discover they had won cash, despite not taking home the major prize.

T.Mihajlovski appeared to be in disbelief that he had chosen the wining briefcase and said he was looking to gift the car to a family member.

Congratulations to all finalists, who were all prize winners in the Bankstown Sports ‘Mystery Briefcase’ Promotion.